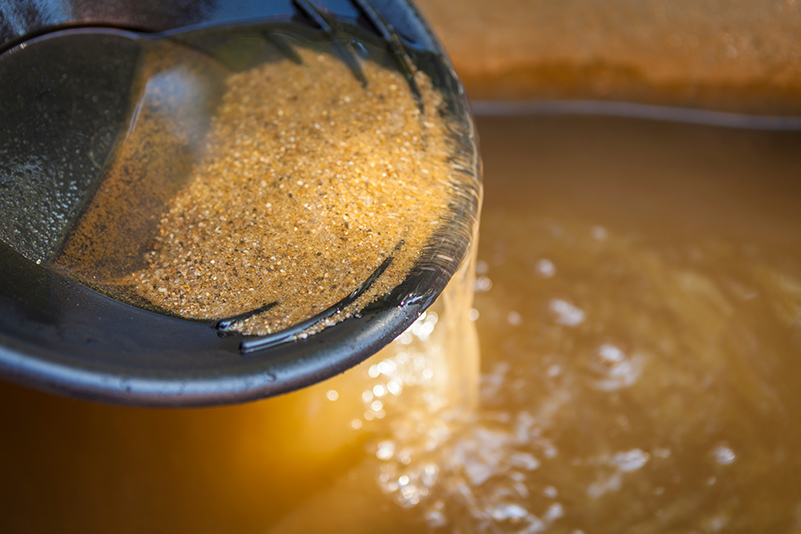 DID YOU KNOW THAT GOLD HAS BEEN MINED in nearly every part of Alaska? Since 1849, there has been gold mining going on somewhere in Alaska and it even continues today.

But it was August 16, 1896 when the real rush began. That's when "Skookum" Jim Mason, Dawson Charlie, and Patsy Henderson discovered rich placer gold deposits in Rabbit Creek in the Yukon in northwest Canada, near the Alaska border.

Placer gold means it's deposited in river beds rather than scooped out of veins in the rock. Miners use a variety of methods to collect the gold, although the most recognizable method is probably "panning." In panning, a miner scoops up a large tray full of sand from a river bed and agitates it with plenty of water. The heavy gold particles settle to the bottom and the relatively lighter sand can be washed away.

But panning isn't an efficient way to do large-scale mining. Once the miner uses the panning method to quickly find out of a deposit has gold in it, another method like the Sluice Box or Trommel would be used to process a large volume of ore.

It was in July, 1897 that the Skookum party arrived in San Fransisco and Seattle with large cargos of gold from the Yukon. Thousands of prospectors came to Alaska and the Yukon in search of riches. In just a few months the population of the Klondike region was 40,000 people. Many of them arrived with few provisions and mass starvation followed that first year.

That's why the Canadian government imposed a rule: each prospector was required to bring a year's provisions with them or they'd be turned away at the border. That meant bringing along a thousand pounds of food, all their mining gear, and everything else they'd need to survive in the frozen wild.

There were three routes to the Klondike. Most took the steamer from Seattle to Skagway, Alaska near Juneau, then hiked 25 or more miles over dangerous mountain passes to the river then rode another 500 miles on boats before they reached the gold. Others tried the Canadian route from Edmonton or through BC, but that was so hard that many prospectors took more than two years to arrive. The easiest way to get there was by steamship to the mouth of the Yukon River in the Bering Sea then by boat all the way upriver to Dawson City. Only those who were already wealthy could afford that route.

Dawson City formed nearly overnight and became a wild place with saloons, dance halls, and gambling parlors barely held in check by the Royal Canadian Mounted Police. But by 1899, only three years after the first discovery of gold, the rush was over. New gold strikes in Nome, Alaska distracted the thousands of hopefuls and the Klondike emptied as fast as it had filled.

But the effects lasted a long time. Towns like Skagway and Dawson City were created by the gold rush and the tens of thousands of new Alaska residents soon turned their minds towards building permanent towns, gaining political power, and forming transportation routes from the US mainland. Eventually this led to statehood for Alaska. 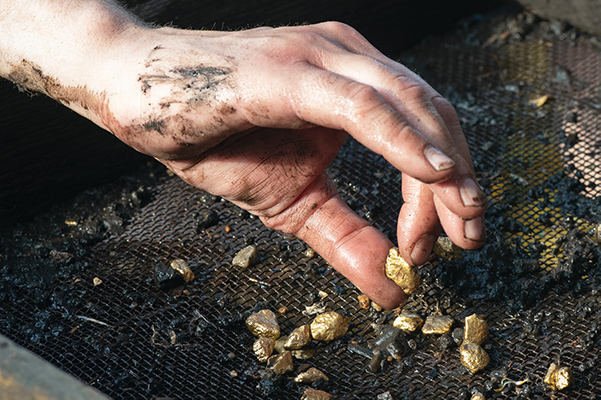 The Gold Rush in Popular Culture

Many writers and entertainers found the subject of the Klondike Gold Rush fascinating. Jack London, the famous writer, wrote several books and stories about these times. The Call of the Wild, his most read book and White Fang which was made into a movie were both about the prospectors.

The famous comedian Charlie Chaplin's most popular movie was his 1925 silent The Gold Rush where he plays a down-and-out hobo who tries to make a meal of his own boot. At the end of the movie he strikes it rich and gets the girl. It was a smash hit and the highest grossing silent comedy ever.

In Robert Service's famous poem, "The Cremation of Sam McGee," the frozen deceased prospector wakes up and complains of the draft when his friend opens the furnace door to see if the cremation is complete. "...The Northern Lights have seen queer sights, but the queerest they ever did see was the night on the marge of Lake Lebarge I cremated Sam McGee."

And even Scrooge McDuck, Donald Duck's fabulously wealthy uncle, was said to have earned his multiplujillions of dollars in the Klondike.

The Main Store in Anchorage

Our Main Store and Factory in Anchorage, Alaska, is the heart of the company. Take a tour of the candy kitchens, visit the World's Largest Chocolate Fall, and during the summer, see the gift shop come alive with entertainment including singing, dancing, and fiddling.

Our Original Store in Homer

Our Original Store in Homer is no longer open, but we thank it for giving us nearly 70 years of history! Hazel Heath, we remember you with every batch that Wild Berry Products cooks up well into the 21st century.

Our 5th Avenue Mall Store in downtown Anchorage is great for a quick candy refill.